On that cold morning in Sydney, the Mushroom Farm’s workers came together in an Appreciative Inquiry Summit to share and collaborate as equal members, where the sum of the whole was bigger than the parts; where rank, job title, sex, age or nationality were irrelevant. Every person that morning was an equal player and every story mattered in the process of co-innovating a shared future through the lens of wholeness which is the combination of strengths at scale.

See Part One: The Disruptive Power of Wholeness

This was not usual, in fact it had never happened before, not at the Mushroom Farm. Management is top down, hierarchical and manages its parts from Deficit, with no concept that the workforce on the ground floor are equals in the co-creative stakes. 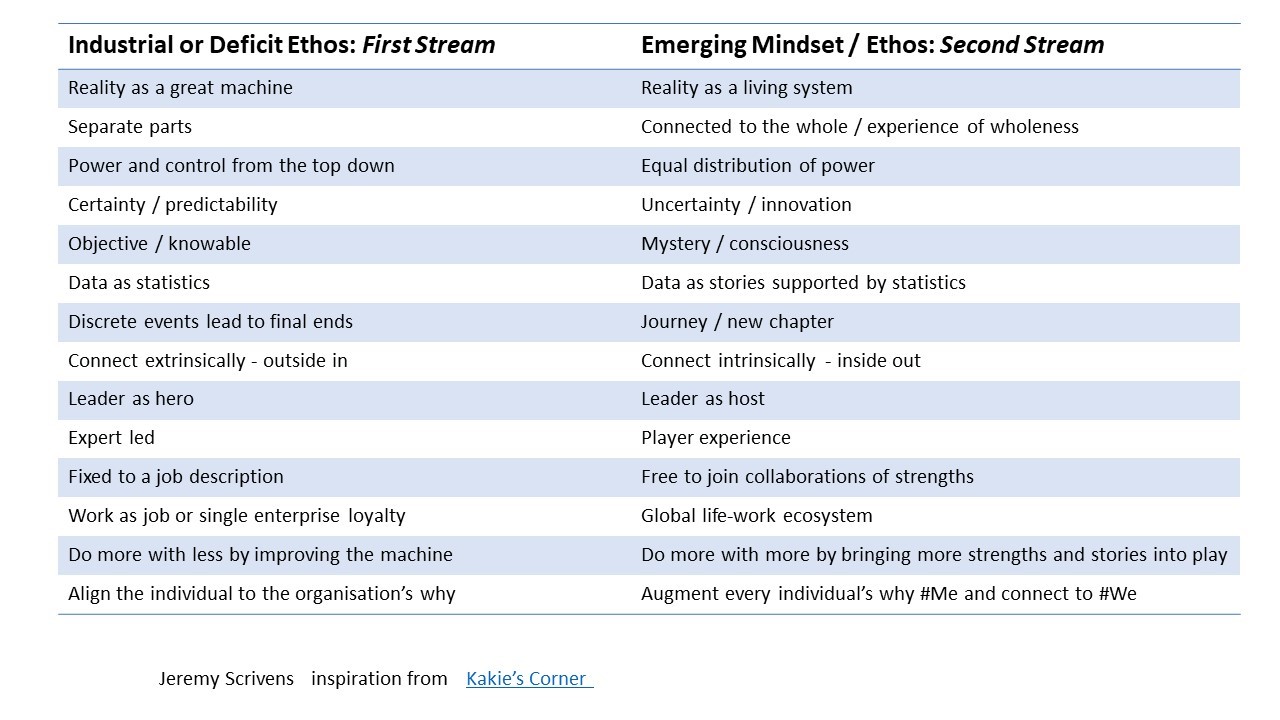 Deficit Mindset believes that life, business and workers are problems to be solved. Deficit sees the world as a tough place, the survival of the fittest; where we scheme, scramble and fight our way to the top of the tree with only one winner. It is a business mindset which is hierarchical and controlling: where power is vested in the top and decisions are made for ME not WE. Deficit Mindset aims to hoard, protect, barter, take, subdue and dominate. Deficit Mindset sees everything and everyone through the lens of money, cost and machines; workers are a necessary evil, doing the work that can’t be performed by the machines alone or outsourced. People are numbers on a balance sheet, cogs in the machine to be hired or replaced at will because one pair of hands is like another right?

According to Gallup, in Aussie, only 25% of the workforce is engaged at work, 13% globally. I call the engaged workers Contributors, and a workplace Culture of Contribution is the fuel that drives innovation. Contributors work for leaders who see the world through the lens of Abundance, where the wholeness of every individual – their strengths – is engaged and brought into play together with the strengths of others to do more with more, not more with less.

The Mushroom Farm’s CEO, Allen, had been brought up in the deficit world. He engaged his workers with their hands but asked them to leave their heads (the imaginative bits) and their hearts in the locker rooms each morning, along with their smart phones.

Gary Hamel, a leading thinker about the future of business, said that in order to survive and prosper, all companies need to innovate and to do so by engaging the strengths, ideas and passions of their people. He said that engagement is not an option but the core of the future enterprise.

Some years ago, The Gallup Group, who have been studying engagement for years on a global scale, came up with the finding that engaged workers – The Contributors – are first engaged from the heart, then, and only then, their heads and hands. It follows then, that the process of innovation requires a process of engaging a workforce to collaborate and co-create and it starts with the heart, not the head.

Read More on LinkedIn
The future of work starts with a question #what breaks your heart? The Mushroom Farm